By Kevin Shaw
You'd be surprised at some of the Pats things that I've collected over my lifetime. Or for the people that know me it really wouldn't surprise you. I've been going through my many things and found this... 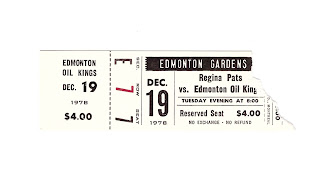 I found this on eBay a couple of years ago. It's a ticket stub from the Pats at Oil Kings game from the day I was born. I thought I'd share it and maybe some one would get a kick out of it. By the way the Pats were shellacked 8-2. From the Leader-Post:

"There was no particular reason for switching the goalies." said Pilling. "The writing was on the wall by the time the national anthem finished, so I figured I may as well use both netminders."

On this date in 1981 the Pats defeated the Winnipeg Warriors 11-0. Darren Bobyck led the charge with the hat trick, Brent Pascal added a pair with singles coming from Darren Galley, Jari Helle, Bill Ansell, Garth Butcher, Dave Michayluk and Barry Trotz. Micahyluk and Jock Callander also chipped in with 4 helpers each. Neal Girard stopped 37 shots for his 2nd shutout of the season.

That's it for tonight.