By Kevin Shaw
I think I have fixed my computer issue.


On this date in 1917 the Pats played their first ever game. 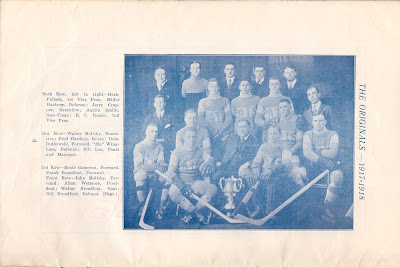 The Patricias defeated the Regina Victorias 5-2.

From The Regina Leader:

Showing a burst of speed in the second period, which took the then leading Vics off their feet, the Patricia hockey team won the initial home game of the season at the Arena rink last night by a score of 5 to 2. At the end of the initial session, the score was 2 to 1 in the Vics favor and the Pats looked like a beaten club. They were far from that as they demonstrated in the middle twenty minutes.

Winners Deserved Game.
The winning team deserved the game for the great spirit they made in the intervening session. However, an injury to Paquet, the goal tender, helped some. He was cut on the chin from coming in contact with Dutkowski’s stick and when he returned to the ice, two goals were scored in less than ten seconds after one another.

The game was a fast one, far more so than anyone expected and the boys surprised everyone by the speed displayed especially in the second period, when they sped uo and down the ice like race horses.

Some High Feeling.
The feeling between the teams was at a high tension especially in the first period. There were penalties galore in this twenty minutes, but the hard feeling died away and the boys paid more attention to hockey, and less to the man in the second and third chapters.

The Pats had more weight than their rivals and they used this weight to good advantage in the middle and final portions of the game.

Bill Broadfoot Starred.
Bill Broadfoot was the star man of his club and did more than anyone else to bring victory Patward. He was in the game every minute and stopped dangerous rushes of the opposition at times when the Vics looked as if nothing could stop a goal, Behind him was his fifteen-year-old brother, Walt Broadfoot, and the kid was as cool as an Eskimo in a snow hut. He didn’t let anything bother him with the result that he played a swell game, Harding was the best of the forwards. A good move was made in the second period when Hackney was replaced by Wingham. The latter played a strong game and paired well with Broadfoot on the defence. Bill Molisky was checked hard and was sent to the fence often.

Baldwin and Marshall were the two best players for the Vics. These boys skated like fiends and were in the game at all times. Young Davidson and Frank Broadfoot had a hard tussle at centre ice with the result that neither could shine to advantage, although each played a strong game. Crapper was off the ice too often to do much work for his club, although he scored the first goal by a good shot from the right side.

Paquet played a dandy game in goal and the counts that got by him were well-nigh unstoppable. The Vic defence played better in the first period than in the other parts of the game.

Neither of the teams played much combination, although this could not be expected at this stage of the season. The shooting was not “dead on” and the losers had better aim last night than the winners.

Ice in Good Shape.
The ice was in prime shape and this allowed the boys to speed up to their hearts’ content. The game was well handled by the officials, Delehay and Captain Otton. The latter had a lot to do in the first period, but after that the players didn’t give him so much work.